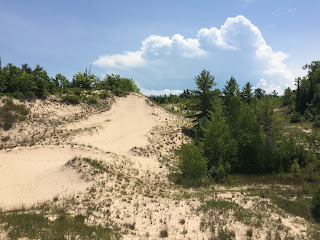 I’ve been up in Michigan again this summer, spending a lot of time with my family, as well as getting out in the woods and fly fishing on my favorite lakes and streams. I’ve also been getting some work done.

I published a piece on careerism in college at Public Books—it’s part of a short book I’m working on about liberal arts education. This year I am going to volunteer at the small public school I graduated from in northern Michigan, offering guidance and advice to juniors and seniors who are researching college options. Since I graduated from high school, I’ve had experiences at four quite different institutions around the country—as a student and as an instructor—and I hope I can help some students in their searches for a good fit. I hope to learn about what high school students think about college, and see how this accords (or not) with my sense of liberal arts education in the early twenty-first century. If the experience is interesting, I’ll write about it—maybe it will even become a part of the book.

I wrote a review of Don DeLillo’s novel Zero K for 3:AM Magazine.

I wrote a piece for Inside Higher Ed on how scholars can use Twitter.

I revised a book chapter for a collection called Sweet Spots: Interstitial New Orleans. The book should be out sometime next year from the University Press of Mississippi, and my chapter is about Louis Armstrong International Airport as a specially liminal space.

I wrote an article for a transportation-themed issue of ISLE: Interdisciplinary Studies of Literature and Environment. My contribution is, not surprisingly, on air travel—but I’m moving in new directions that come out of my current book-in-progress, Airportness: The Nature of Flight.

I’m making good headway on Airportness and plan to deliver the final manuscript in December.  There’s still a lot to do, but I am at the point where I can visualize it in my mind—I can see the shape of the whole book, and see how the pieces have to fit together. It’s a fun if also daunting part of the book assembly project: moving blocks of writing around, creating transitions, experimenting with formal flourishes and other structural details, and so on.

I’ll present a piece from Airportness at the Western Literature Association conference in Big Sky, Montana, later this month. My paper is called “Airportness in the West: Fame, Fantasy, Frontier.” I'm on a panel called Dispatches from the Post-West.

Meanwhile I’ve been reframing my “Up in Michigan” book project, and I have focused it on broader issues of ‘place’ and the problems and possibilities of landscape ecology in the age of the Anthropocene. I’ve honed a fresh version of the proposal and hope to finish the book during the second half of my sabbatical year (so, January through next summer). Reading Helen Macdonald’s H Is for Hawk prompted me to think creatively about how I can indulge in nature writing while also critiquing it from the inside, as it were.

Lit Hub revealed a bunch of new book covers and titles signed for our series Object Lessons. We’re about to enter an intense period of serious manuscript editing, as we prepare to release a mega-batch of books in the series in late 2017. If only I could have a bunch of my wonderful Loyola students up here in Michigan, to help me with the series! (Luckily, I have a couple dedicated students working with me from afar.)

I’m heading now into sabbatical, for real. It is very odd to be feeling the sun shift to the south up here in Michigan…usually by this point we are back in the sweltering heat of New Orleans, settling into our autumn rhythms there. It’s strange to not be in the classroom. I don’t miss all the various meetings and never-ending budget crises, but do I miss my colleagues and my students. Yet here we are in the north country, and just last night it got very cool. Wind in the pines, a kind of wind I haven't felt in a long time. The bracken fern have all turned gold, on the hillsides. It’s very dark now in the mornings, when I get up to write.

Posted by Christopher Schaberg at 12:21 PM