Sometimes in my classes we talk about bumper stickers. What does every bumper sticker say, no matter what it actually says? It says "bumper sticker." This always gets a laugh, but what does it mean? Something about the fantasies bundled up in automobility, about passive aggressive modes of communication and community. And something about tone and tautology: about how the form of a statement—any statement—adorning a car always risks being tuned out because it is seen immediately for what it is: just a bumper sticker, whether it infuriates, agitates, or sparks a fleeting feeling of solidarity or smug mutual understanding.

The other day I was riding my bike from campus to pick up my daughter from school when I saw a Jeep with an assault rifle bumper sticker on display. It was a simple silhouette, suggesting a specific make but also transmitting a general threat: this person is proud of their gun ownership, carries a gun whenever they can, is quite possibly carrying a gun right now. 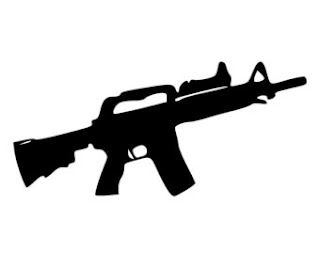 This might have been troubling enough, but in the wake of the Las Vegas mass shooting it was especially chilling. How could this image not conjure the awful, meticulous planning and carrying out of the event which left 58 people dead and over 500 seriously injured? I pedaled alongside this vehicle for several blocks. I thought to myself, how does this person feel okay with broadcasting an advertisement for the technologies of violence that caused so many horrific deaths? We know the answer: they disambiguate, they say that guy in Las Vegas was a "lone wolf." If anything, the situation in Las Vegas can become an argument for more guns, more armed citizens wary and watching for the lone wolves or the terrorists, the common burglars or escaped convicts. Inside the head of gun ownership it must be a paranoid place, always someone out to get you.

But what about this bumper sticker? I was still riding alongside the Jeep, seeing the bumper sticker again at each stop sign. Part of me wanted to attempt to scrape it off the bumper; or, if I had a very thick black Sharpie, maybe I'd just add a bold line as a strikethrough: 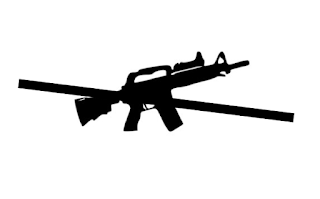 Either one of these would have been stupid, not least because if the driver saw me tampering with their bumper sticker, they might have blown me away with their assault rifle. How else is one supposed to interpret the mandate of such a bumper sticker?

So I established that I wouldn't tamper with the bumper sticker itself, but there it was again as we stopped at the end of the next block. The Jeep's windows were tinted, so I couldn't get any sense of the driver, no familiarizing or friendly exchange of glances that might have humanized the moment and made me forget about my minor obsession. Instead, I obsessed. What could one do to destabilize or defuse such a sign? Then I thought, what about juxtaposition? What if I carried around a bunch of assorted, random bumper stickers that could simply be slapped next to these guns? Gun bumper stickers are often displayed in stark isolation, feeding into the very monomania that fuels second amendment fanaticism. So what if the scene were just, well, crowded a little? I imagined reaching into my pocket, peeling off the back of the sticker, and slyly affixing one as I pedaled past the Jeep...then another along the next block. 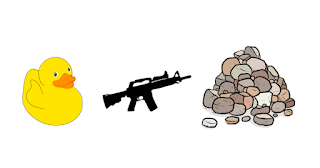 A rubber ducky here, a pile of rocks there...just the stuff of life surrounding the gun. Because this is what bumper stickers resist more than anything: complicating the picture. Bumper stickers drive at common sense understanding, obvious solutions, affiliations with the right group. So what happens when bumper stickers become less clear? What is an assault rifle that jostles with a plastic toy and some stones? I don't know, but it's surely better than the gun on its own, isn't it? Such a grouping might say something about the nature of coexistence, about affiliations that are less than obvious, amalgams that are less than clear in their function or makeup. It might invite dialogue rather than death dealing.

Of course, it's still their Jeep and they have a gun and so I'll keep my bumper stickers to myself, at least for now.


Posted by Christopher Schaberg at 6:51 AM