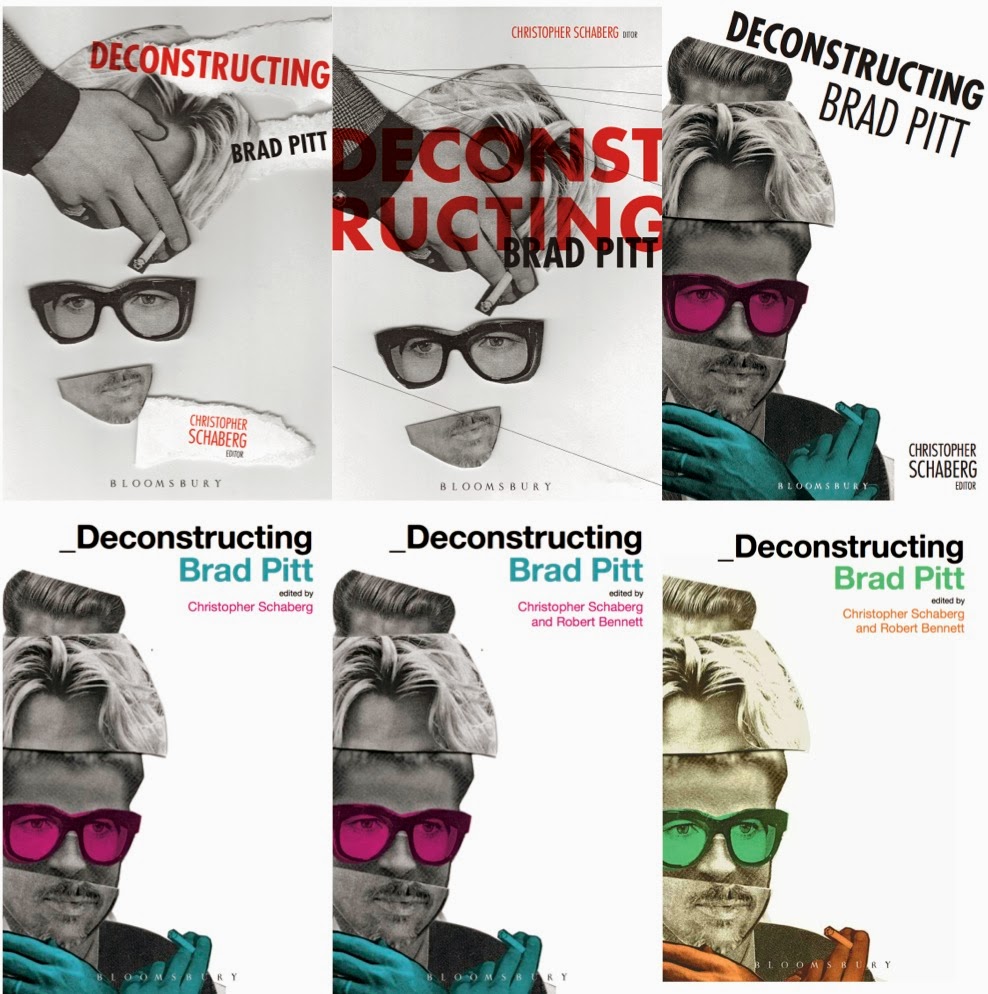 evolution of the cover

Last weekend I delivered the final manuscript of Deconstructing Brad Pitt. It will be on bookshelves this coming September.

This book was incredibly stressful to put together, but highly rewarding in the end. It was, to borrow Brad Pitt's own word applied in various contexts, a "journey." (Most books are, but this one palpably so.)

From the original call for papers, some of the chapters never materialized; and some of those that did show up needed serious revisions that then never materialized. One contributor died. Another one went crazy (read the book for the rest of that story). My own chapter kept evading me and shifting topics as it moved—finally I nailed it down and had a lot of fun with it, but it's pretty weird. There were other quirks and oddities not suitable for discussion on a blog.

Originally I intended to edit the collection myself, and I went at it alone for about a year—but it became overwhelming. The chapters seemed at turns too personal or too detached. Editing the chapters was like trying to get into other people's heads, and specifically that part of a head that is obsessed with someone else. (The experience was reminiscent of Being John Malkovich.) Celebrity studies is a hard thing to get right: it is all too easy to be cooly dismissive, or to take things way too seriously. It was difficult to balance attachments to Brad Pitt (as an artist, as an icon, as a person) with the more exterior conceptual framework, such that the book would have critical value (whatever that means).

My friend and co-editor Robert Bennett really saved the book. Last summer I invited him to join me on this distinguished endeavor, and luckily for me he accepted. Robert came on the scene with fresh energy and ideas for how to think about the book and arrange its contents. The book has this sidelong relationship to Jacques Derrida—thus the "deconstructing" in the title—and we were trying to play throughout with some of the more approachable ideas implied by his quasi-philosophy. But we're not trying to suggest that Pitt is uniquely deconstructive. Rather, it is simply a useful way to think about all sorts of celebrities, how they appear and what sort of cultural work they do, how they communicate. I like to imagine an ongoing series of books applying this title-word and accompanying strategy: Deconstructing Philip Seymour Hoffman, etc. I may be the scourge of the humanities, but it seems to me that if we can't use our ideas to talk about the shimmering and vibrant world around us—then what are we doing? And the thing about deconstruction is that it is a positive term. It's generous. It gives.

For a project that started out as a joke over ten years ago, and which may strike some as ludicrous, this book turns out to have surprisingly good essays in it concerning a range of issues connected (more or less directly) to the name Brad Pitt. It's a book that takes Brad Pitt seriously, but which is also playful. It's personal, and yet aware of itself. I'm really happy with how the book turned out, and very glad that it is done.

Posted by Christopher Schaberg at 7:33 AM