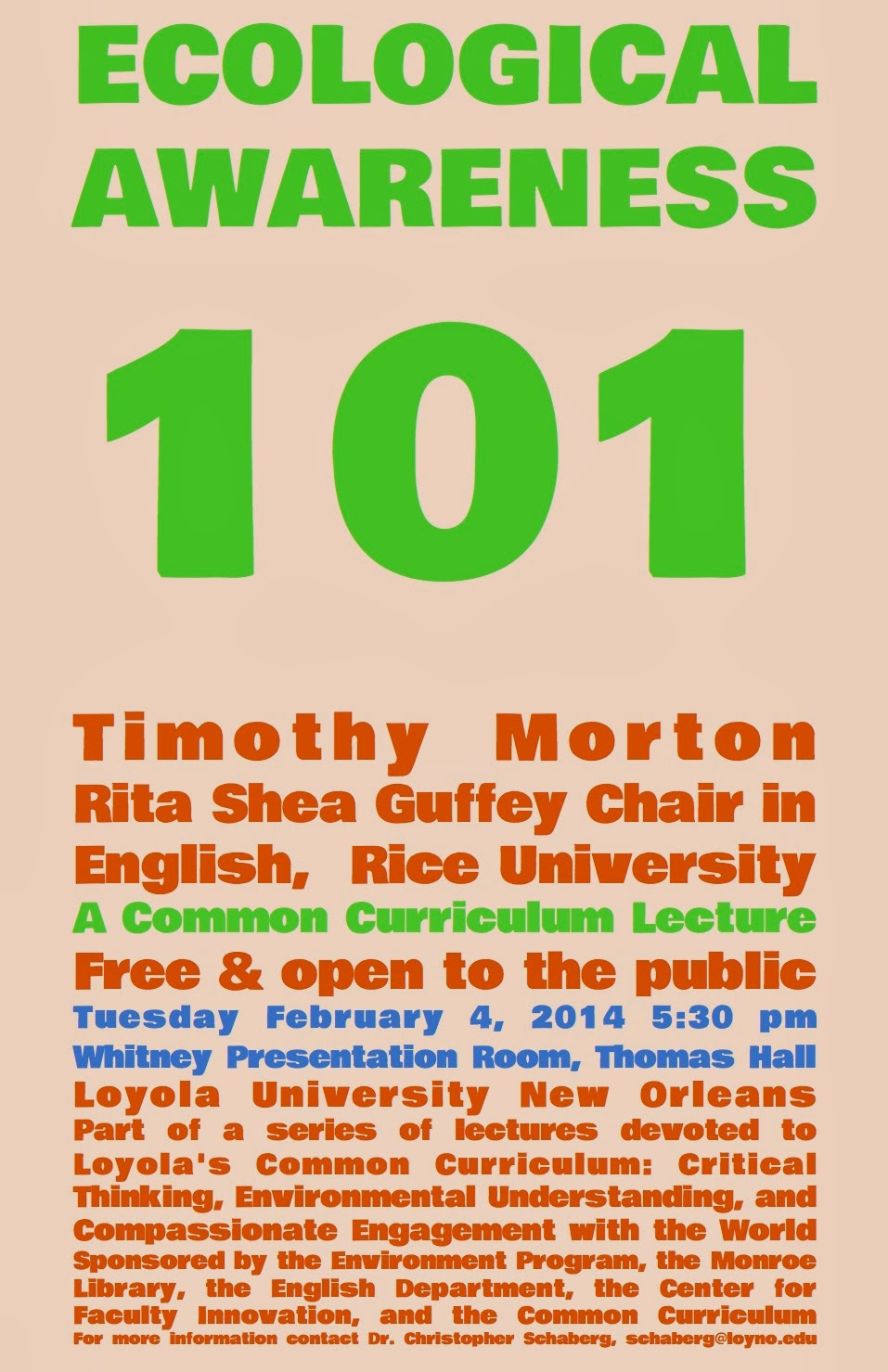 The title of this blog post is silly; Tim Morton needs no introduction at this time. But I had to introduce him last night, before his talk at Loyola, and writing an introduction for Tim was a nice walk down memory lane—so I'm posting it here for general reading:


I first met Timothy Morton in 2003, when I was starting out as a PhD student at the University of California, Davis.

Tim had just been hired at Davis, to replace the famous poet and acclaimed nature writer Gary Snyder, who was retiring around that time. These were big shoes to fill, but we heard enticing rumors of Professor Morton's edgy and daring style of eco-criticism, and we had our hopes set high.

That first year of grad school, I took one of Tim's seminars on environmental aesthetics, and I'll always remember one day when Tim came in, plugged his laptop into the room's loudspeakers, and broadcast the computer as it robotically and awkwardly read his notes aloud for the day's discussion. Tim sat there silent and grinning; we sat there uncertain, shifting and uncomfortable—which somehow exactly proved his point that day. (We were discussing Frankenstein.)

A few years later I worked up the nerve to ask Tim if he would be on my dissertation committee; I was writing about airports in literature from a curious ecological angle. Tim told me to meet him at his office the next day.

I met Tim at his office the next afternoon, and he suggested we go get coffee.

Twenty minutes later, we were sitting on a bench in the quad, sipping coffee and looking out at the cork oaks and streams of bicyclists. I launched into some elaborate theories of postmodern space, dislocated regionalism, and air travel's place in all this. I had brought a few pages of typed questions and notes, which I handed to him at some point. Tim scanned the pages as I rambled on for several minutes.

Then I stopped, completely out of steam. I needed guidance—that's why I was a graduate student, after all.

Tim paused, looked back at my pages, then around the quad…and then he asked me:

"Have you ever really tasted an avocado?"

We spent the next 45 minutes talking about avocados—and this conversation totally changed how I thought about airports.

That pretty much sums up what it's like to work with Tim: he catches you off guard, in exactly the right way.

One of the most important things I learned from Tim was about teaching, and it proves more true and effective each year that I teach college courses.

This was in a graduate seminar on pedagogy; we were talking about poetry, and all the ways you could teach rhyme and meter, explain structure and form—but at one point Tim broke through all the jargon and said, "You know what? Just dare to be dumb."

This was shocking, but so true: between the students and the texts in front of us all, we'd figure it out. It's all there. All we had to do was dare to ask simple questions, without having already made up our minds. Dare to read things slowly—decelerate! was one of Tim's mantras in that class.

The longer I teach, and the dumber and dumber I feel each year standing in front of savvy new college students, I take more and more solace in Tim's point. Daring to be dumb means letting raw intelligence emerge in front of me, each new year, in every class.

Tim's writings on ecology, aesthetics, literature, and philosophy are audacious and sincere, trenchant and playful. His work has influenced myriad fields, and for good reason. It will rock your world, if you're open to it.

Posted by Christopher Schaberg at 7:35 AM