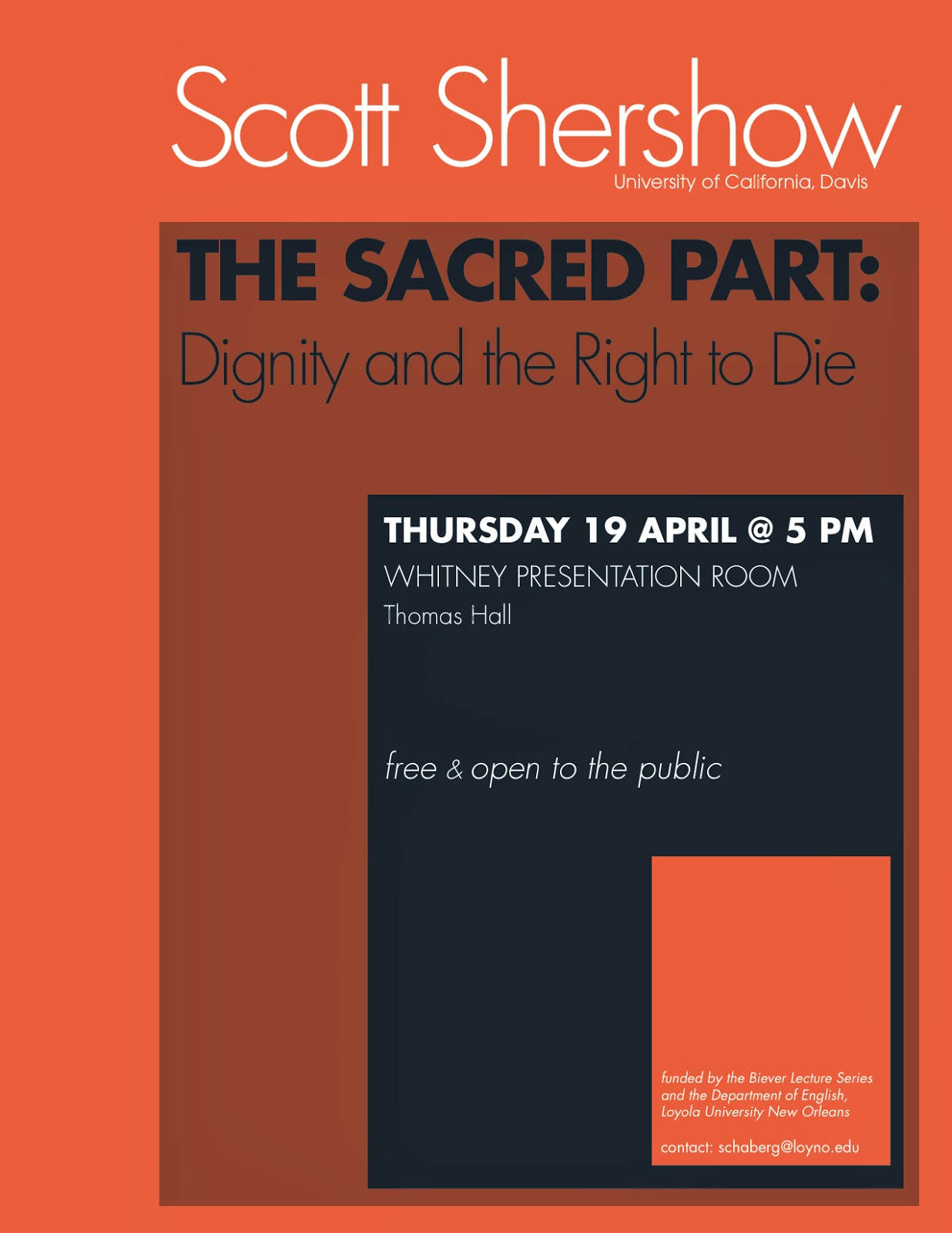 Scott Shershow is a great friend and was a fantastic mentor of mine at UC Davis; he directed my dissertation on airports in American literature and culture. Scott visited New Orleans a couple years ago and gave a fascinating talk at Loyola last year on the philosophical debates that undergird laws and ethics around the topics of suicide and the right to die. The book that developed from that talk, Deconstructing Dignity, has just come out, and Scott has a terrific post at the University of Chicago Press's blog on recent episodes where these issues have flared up once again in the news, stirring up a range of tense (and not always consistent) emotions, attitudes, and ideas. This got me thinking back to Scott's talk at Loyola last year, and I realized I might as well put my introduction to Scott here on my blog. The introductions we write for guest speakers often become so much more ephemeral work done by academics—a crumpled page in the recycle bin or a forgotten file in a blue simulacral folder, never to be looked at again. So, here it is:

I’ve been referring to Shershow’s “work,” but what I really should say is that Shershow excels at unworking texts—and not just literary texts, but all sorts of structures and textures that form and inform everyday life.

Whether he is elaborating the most troubling and perplexing implications of torture, describing precisely how a Sarah Silverman line clinches a philosophical knot, unpacking the dense rhetoric of ‘sacrifice’ in post-9/11 discourse, or delineating the conflicting economic schemas that course through the Hollywood blockbuster Titanic—in all these cases, Shershow’s thinking maintains a buoyancy, a rigor, and a flexibility that is always refreshing, and equally challenging.

Where I am tempted to quote something from the philosopher Jacques Derrida in order to further elaborate Shershow's contributions to contemporary critical theory, I will instead turn to a few lines by Wallace Stevens, from “The Ultimate Poem is Abstract”—these lines, I believe, evoke the spirit of Scott Shershow’s unique and inspiring style of inquiry, unworked:

If the day writhes, it is not with revelations.
One goes on asking questions. That, then, is one
Of the categories. So said, this placid space

Is changed. It is not so blue as we thought. To be blue,
There must be no questions. It is an intellect
Of windings round and dodges to and fro,

Writhings in wrong obliques and distances,
Not an intellect in which we are fleet…

Posted by Christopher Schaberg at 1:04 AM