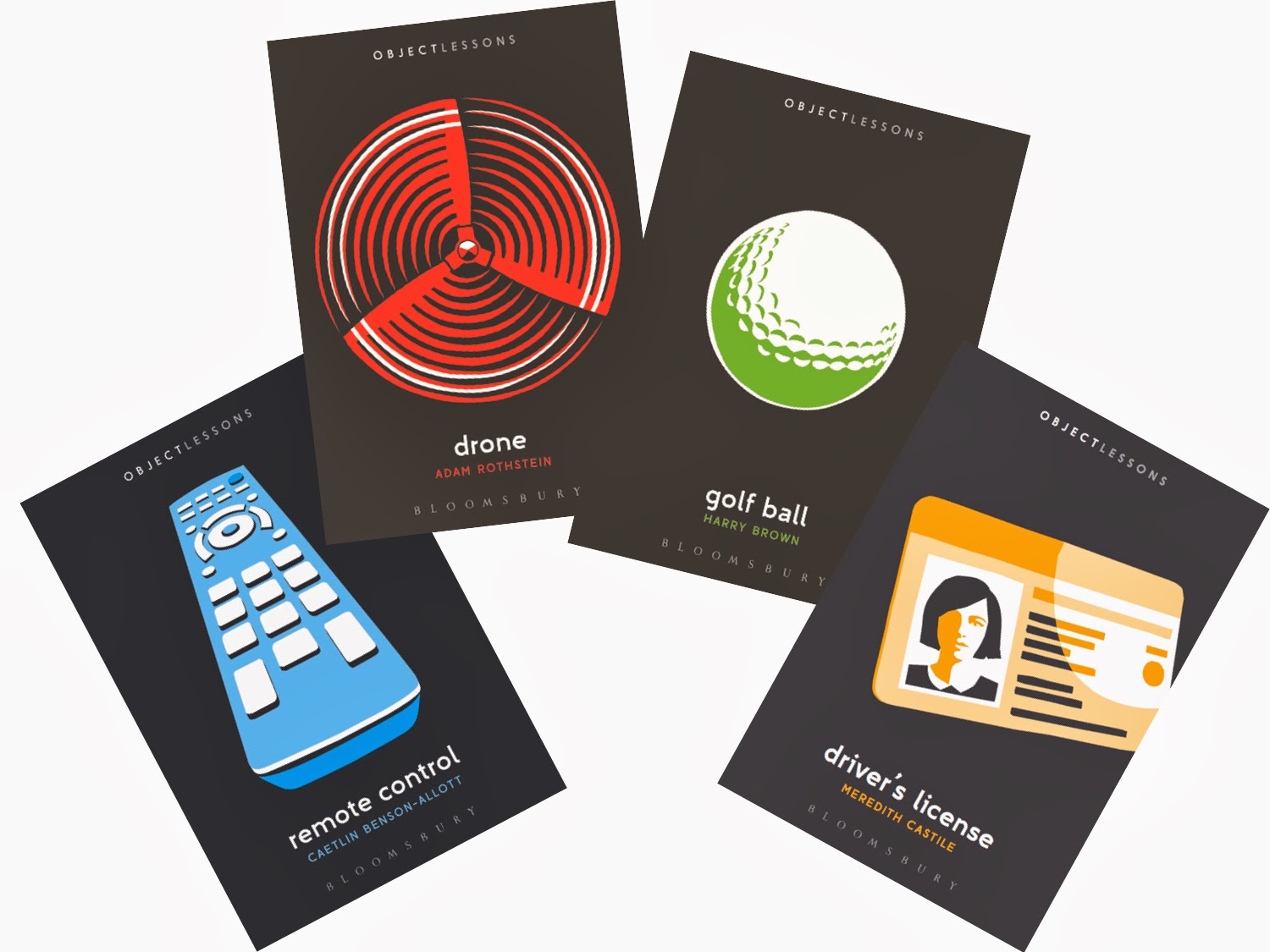 Earlier this winter Ander Monson asked me & Ian to do an editor's post on Object Lessons for the Essay Daily; it's up and you can see it here. And now for further edification, here's even more—the backstory of the series:

A few years ago my editor at what was then Continuum, Haaris Naqvi, and I were eating at a Thai restaurant in Providence, Rhode Island—this was during an ACLA conference hosted by Brown University. I had just presented a paper on David Foster Wallace's use of air travel in The Pale King. Over bowls of steaming curry, Haaris wondered if I’d be interested in proposing a new series of cultural studies books for the press. (My recently published airport book had triggered this idea.) At that time I had been reading lightly if enthusiastically across the burgeoning movement called Object-Oriented Ontology, and teaching some of these texts in my courses at Loyola, and I immediately thought about a series devoted to single objects and the lessons they hold. On the spot I came up with the series title “Object Lessons.” Reaktion has a very nice academic series called objekt—I admired these books, but wanted more of them. Lots more. And I wanted them to be a little shorter, pithier: books you could read on a single cross-country flight, say. I had a vision for the series: an endless list of slim books unified by a striking design, brief titles (one or two words, no subtitles), and the utterly unexpected juxtapositions that would occur between the volumes over time.

I had this hunch that there were plenty of academics who know a lot about single things—whether from long research projects or just from everyday life and non-academic hobbies. But there isn’t really a place for this kind of para-academic writing: a place to write about that one thing that captivates you but which in normal academic writing would get subsumed by vast apparatuses of frameworks, concepts, and theory. So much scholarly writing ends up in forms that are either too expensive for the common reader to access, or too abstruse to understand (much less enjoy) if you are outside of the author’s discipline or field of expertise. Where can an academic write more playfully, in accessible prose, for a wider audience? (There are blogs, sure—but who really wants to read another blog?)

I initially saw Object Lessons as a venue for two types of academics: junior scholars who were working on a traditional monograph but who also had a pet project, maybe some minor topic that got a page-worth of attention in their book, but which could warrant a small book of its own; and more senior scholars who were at that point in their career when they might want to write a smart yet accessible book on a single thing—something they know enough about to come at it from a surprising angle.

From the outset I envisioned the series as having crossover appeal: a venue for public intellectual writing (in the best sense of that phrase). Neither compromising theoretical sophistication nor abandoning lucid and lithe prose, the series would be a place for good smart writing on a wide range of ordinary and concrete topics. Was this unrealistic, idealistic, too neat and tidy a vision? Probably so.

Nevertheless, I started conjuring this book series, and as part of the initial proposal I asked about a dozen writers and scholars whose work I admired to serve on the Advisory Board—including Ian Bogost, whose wonderful Alien Phenomenology, or What It’s Like to Be a Thing I had just read.

About a year later, Ian came to New Orleans to give a talk from a new book project, and over wine one afternoon we were talking about the book series, and Ian suddenly raised the stakes: what if it weren’t just a book series, but if it had a corollary essay series, published in a high profile venue like The Atlantic? It turned out that Ian had been mulling over a similar series idea, but essay-oriented, rather than geared toward books. But what if we merged these plans? In short, what if it was a series with two outlets, for two (not mutually exclusive) forms of writing?

From that point on, things happened fast. We drafted up a proposal for Ian's contacts at The Atlantic, and Alexis Madrigal and his savvy crew loved the idea of the series. The essays would be run primarily out of their Technology Channel, which gave us a useful constraint and challenge for how to describe what we meant by 'objects'. (You can read some of that proposal's language here.)

As we sat there discussing the series we intermittently rattled off lists of objects, at turns focusing and expanding the potential scope of the series:

While we were developing the proposal for the series, something happened to Continuum: it merged with the publisher Bloomsbury, which ended up working out well for us, as the larger independent publisher offered the series a wider platform and robust marketing. And Haaris got promoted. Haaris is terrific, and helps us move our book proposals through the review and vetting processes at a brisk pace. He's also a champion of top-notch design and overall book quality, which is one of the ulterior motives of the series: to make books that are themselves elegant objects, pleasant to hold and to read.

We launched the series in June 2013, and you can read the rest at the Essay Daily...

Posted by Christopher Schaberg at 4:50 AM